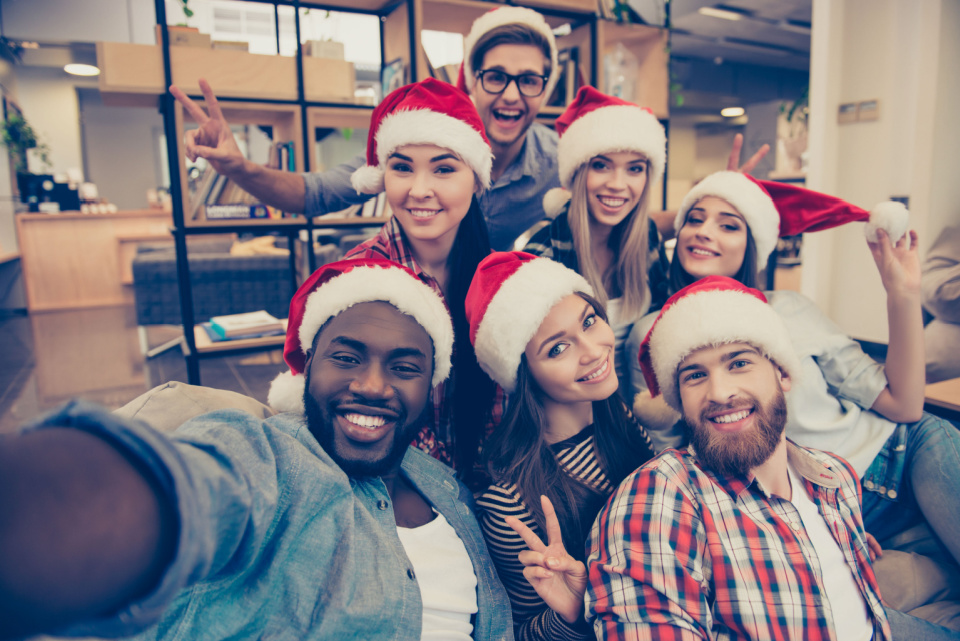 The question of the holiday office party has always been a tough one. Should we host one, or pass? Should I attend, or not? And does it count as an employee perk? Holiday bonuses are common, but not universal. For some companies, the choice is one or the other. Parties are expensive, after all. There’s the venue rental, but that’s just the start. Catering can be incredibly costly, especially when there’s an open bar or drink tickets included.

Do you pull those expenses from the same budget as holiday bonuses? Do you see the party itself as an employee perk? If you’re deciding between the two, it’s important to choose wisely. This year, more than ever.

They’re a time honoured tradition, for better or worse. At their best, they can help to foster a cohesive culture, bringing everyone together to celebrate with a bit of festive cheer. Giving people the chance to meet the partners and spouses of the people they work with. They’re an opportunity to let off some steam with colleagues. To celebrate the end of one (hopefully successful) year and the coming of another. At their worst, there are the horror stories, too. We’ve all witnessed, or at least heard about, the awkward – and occasionally worse – antics of a few people, often fueled by a few too many trips to the bar.

Some people love them. The extraverts, the social butterflies. Many business owners and managers see them as culture building, and a way to show their employees that they’re appreciated. Some employers and employees alike view them as a benefit, an incentive. They see them as a perk that the company offers, one to appreciate and be grateful for.

Without question, other people hate them. Some, because they’re introverts. Social gatherings aren’t energizing for these people; they’re draining. Even if they sincerely like every person they work with, an evening out with all of them isn’t appealing. For some people, it’s just because they prefer not to socialize outside the office with their coworkers. For others, it’s because time with their family is a priority, particularly around the holidays. None of these preferences should be a reason to see anyone as less than a team player, and yet that happens.

The danger in this divide is that it creates a rift along pro-party and anti-party lines. Ironically, an attempt to bring everybody together can have the opposite effect. Disproportionately, it creates a dilemma for the people who would prefer not to attend. Regardless of the reason they’d prefer not to, should they attend, with grudging reluctance? Or should they respect their own decision to pass, and risk appearing to be antisocial?

This year, there’s the economy to consider

A lot of people are feeling a financial pinch this year. The cost of living is significantly higher than it was even a year ago. Food and energy prices are up, as is the cost of borrowing. I know a few people who are saving up for a head of lettuce. And I’m pretty sure that I saw a loan application at the pump when I stopped for gas last week.

First, there are some very real costs that come along with attending a holiday party. For some people, it means buying a new suit or a dress. For those that have them already, there’s the dry cleaning bill for the party attire. For some, there are childcare costs. Perhaps there are a few drinks through the course of an evening out. There’s money for parking, or for an Uber. Possibly even a hotel room.

Many people are already planning to scale back the money they spend on gifts for their friends and loved ones. It’s a pretty safe bet that those people would prefer not to incur these extra expenses.

Second, lots of people could really use a financial boost right about now, to keep up with the rising costs.

Even in years past, when more people were a bit more flush, surveys have shown that more people would choose a holiday bonus rather than see that money go to fund a party.

Want more recent data? I posted a question about this recently and got a flood of comments in response. An overwhelming 96% voted that they would prefer to receive a bonus. Most said they didn’t really want to party with their coworkers or bosses, and that they’d much rather spend the money on their loved ones. My poll may not have been quite as scientific as some broader surveys, but a 96% swing in one direction is pretty decisive.

And then there’s COVID

There are two competing dynamics at play in 2022, both related to the pandemic.

Companies have endured two full years of pandemic distancing. Two years of Zoom meetings that used to be lively team meetings. Two years of phone calls and emails that used to be face-to-face one-on-ones. Two years of quiet hallways and empty kitchens. Many employers are eager to get everybody back into the office. And for similar reasons, they want to bring people together for parties. Last year, it was still a bit too soon for most. After two years of social distance, there’s a pent-up demand this year for socialization.

At the same time, and for the same reasons, there are people who aren’t quite ready to join the party. Particularly when it involves a lot of close contact in large crowds. Some employees may be okay taking precautions to be present in the workplace, but would really rather not be packed into a small space with a lot of people. Whatever their reasons – they may be concerned about their own health; they may have someone close to them who’s at greater risk – employers and colleagues need to respect that choice.

What to do? Two recommendations.

First, when it comes to the holiday office party, consider what you’re trying to achieve. This should be true every year, but this year it’s more important than ever. Given the expense, is it worth it? Can you effectively manage the potential effects on culture and morale if some choose to attend, and some don’t? Are you only doing it because you’ve always done it? Would it be a better way of showing appreciation for your team to redirect what you would have spent on a party to a bonus instead?

Second – if you do host a holiday gathering – do not make attendance mandatory. There’s literally nothing that could make this a good idea. Have a great time with the employees who choose to participate, and make it clear that opting out of a party isn’t construed as opting out of the team. Is it possible that they’re just not interested, or don’t want to be part of the group? Sure. But it’s far more likely that they have other reasons, and those reasons are perfectly valid.

To party or not to party?

If you’re on the fence, trying to decide whether to host a holiday office party or to put that money in your employees’ pockets, I’m going to be straight with you. Give your employees the bonus. Surveys and anecdotal evidence are both clear: that’s what they want.

Ultimately the choice is yours, and that choice is unique to each company and their culture. This year, more than years past, it’s important to examine the decision. It may be that the right decision for you is to put that money into your employees’ pockets. Or, a party might be exactly the thing your company and your people need. Just don’t allow an effort to bring everybody together cause divisions instead.